Lt Michael P Murphy was killed on 28 June 2005 after he left his cover position and went to a clearing away from the mountains, exposing himself to a hail of gunfire in order to get a clear signal to contact headquarters for relaying the dire situation and requesting immediate support for his team. He dropped the satellite phone after being shot multiple times but picked the phone back up and finished the call. While being shot, he signed off saying- “Thank You”, then continued fighting from his exposed position until he died from his wounds.

Since 2005, ‘Murph’ has been a memorial day tradition within the CrossFit community. This was Lt Murphy’s favorite workout and he referred to it as ‘Body Armor’. CrossFitters perform these ‘Hero’ workouts to feel some of the pain the families of fallen heroes feel from losing their loved ones and the pain that these heroes felt from making the ultimate sacrifice.

If you have a 20# vest or body armor, wear it.
In honor of Navy Lieutenant Michael Murphy, 29, of Patchogue, NY, who was killed in Afghanistan June 28th, 2005.
To learn more about Murph click here 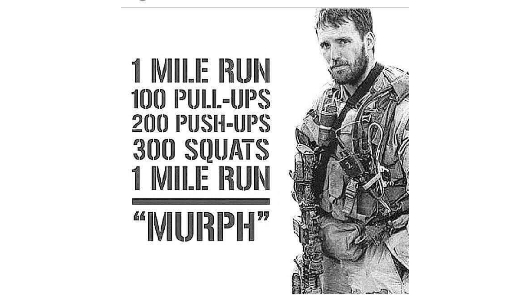